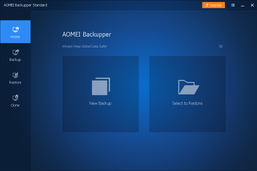 The highlight is VSS, a technology from Microsoft that enables system and data backup processes won’t be interrupted by running applications. So it is very efficient because backup can still be available when you’re working. Besides, this version is free for home users and business users.