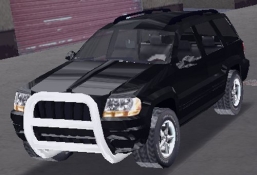 This is a popular mod for GTA III that updates Liberty City to look even more like an average American city.
Included are new cars, new weapons, buildings, bridges, and even the Statue of Liberty. Each car has been redesigned and some familiar businesses have taken up shop in Liberty City. Weapons are stronger, trees have been replaced, new bridges have been added and previously closed areas are now open to exploration. Created as a mixture of all the best GTA III mods, this one is sure to please.

RealGTA3 (=RGTA) is free add-on for Grand Theft Auto 3. RGTA is not a product of Rockstar Games or Take 2 Games, RGTA is ultimate collection of many GTA3 modifications made by independent authors from the whole world, trying to make GTA3 more realistic by adding real cars, buildings or advertisements all over Liberty City. List of all changes is below!

New Weapons. RGTA includes brand new weapons: crowbar, Desert Eagle, uzi KG-9, shotgun, Battle 7, MP5, Sig551, rocket launcher M79, sniper Rifle PSG-1, L2A2 grenades, new molotov, and flamethrower model. The weapons are more effective (by 50 percent on average), so now it’s really dangerous to hang in the area of hostile gangs! You need only few bullets from any weapons to die…but in opposite, you’re invincible if you can use your weapons well.

New City’s Look. These objects have been added to the city: Statue of Liberty – this awesome NY’s statue has moved to Liberty City. You can find it on new island near the Kenji’s casino (it’s even marked on radar), so you must use a boat to get there. There are some useful historical and technical information on the statue’s pedestal. If you want to see all of Liberty City from a birds-eye view, use the stairs to get into the statue’s head or torch. The idea of many players is finally in the game: jump ramp to Liberty Island. Just take a very fast car and try to be accurate in targeting the ramp. If you go the wrong speed or direction, and you won’t land by the Statue of Liberty…you will fall into the water. If you’ll start a new game, there will be a boat by the Liberty Island ready to get you back to Staunton. A new bridge is placed in Shoreside Vale and it’s very useful, because it connects your hideout to the main road near the Francis Int. Airport. If you use Yakuza Toyota Supra Veilside, you can get to Staunton from Shoreside in a few seconds.

The mod also includes new in-game menus and loading screens; in-game texts changed to fit the RGTA; new billboards, posters and advertisements all over Liberty City; water has got a new color; all trees have been changed to beautiful palms; grey rocks/cliffs are now beige like in Greece; the roads look more modern; the pipes in the water have been deleted; you can travel by boat everywhere you want; nail boxes belongs to Euro Express; new helicopters at airport; new pager by CityGear; new crosshairs for rocket launcher and sniper rifle; default ugly radar is now color and very detailed: roads are white, buildings are orange, grass is green, water is blue and places of interest are purple.