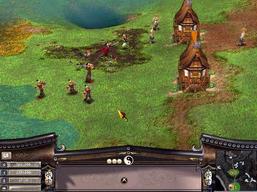 From Crave Entertainment:Battle Realms is set in a story-driven fantasy world that centers around the legends and myths of the martial arts, Feudal Japan, and horror stories. The game world is comprised of several strange and legendary factions including samurai, werewolves, ninjas, and geisha warriors. Players will guide the fate of Kenji, heir to the fallen Serpent Empire. Kenji returns to his homeland after a seven-year exile, and must now make a choice whether to subjugate or liberate the feuding land. Standing against him are the untamed Wolf Clan and the malignant Lotus Clan. In addition, the game is set in a world that features a living resource system . How a player manages resources has a direct impact on remaining tactical decisions in the game. The game also features a combat system that uses combat engagement AI. This AI supposedly allows units to react intelligently to terrain, opponent ability and distance in combat situations. In addition some units have the ability to use secondary weapons.