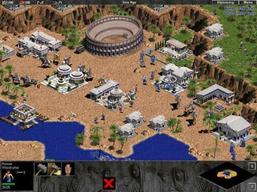 From Microsoft Game Studios:Age of Empires Expansion: The Rise of Rome is the highly anticipated add-on to the award-winning strategy game Age of Empires, the strategy/war winner of Gamecenter’s Reader’s Choice Awards for 1997. Focusing on the legendary Roman Empire, The Rise of Rome will challenge veterans and novices alike to wage war on an epic scale with four additional civilizations, several unique units, new technologies, and new campaigns, including the showcase campaign that focuses on The Rise of Rome.

Multiplayer play is possible on MSN Gaming Zone, via TCP/IP, or via serial ports. In a multiplayer game, all players must use the same version; for example, if you are using the Age of Empires Expansion trial version, only trial version games appear in the multiplayer list.