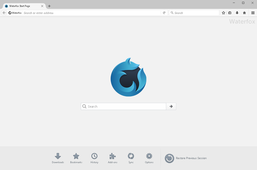 Waterfox is a 64-bit version of Firefox. The browser’s developers modified the Firefox source code specifically for machines running 64-bit versions of Windows. Software designed for 64-bit Windows editions can take advantage of faster RAM and processing speeds and greater stability in 64-bit systems. Just converting Mozilla’s source code for 64-bit Windows doesn’t do enough to make Waterfox stand apart from Firefox and other Firefox-based Web browsers; other unique tweaks help it exploit the speed of 64-bit systems. As the Waterfox Web site states, speed is its mission.

When we first opened Waterfox, it displayed our bookmarks and other personal data from Firefox. When it comes to looks and extras, Waterfox doesn’t disappoint in a side-by-side comparison with the latest Firefox release. Waterfox has a family resemblance to other Mozilla-based browsers, with a dark blue Start button instead of Firefox’s orange. Otherwise, Waterfox looks and functions like Firefox, including its various customizable features and options. Our add-ons, extensions, and plug-ins worked in Waterfox, too, including Microsoft’s Office and Silverlight plug-ins. Waterfox also has regular updates.

We could tell with just a few quick trips to familiar sites that Waterfox is fast, so we visited some of our favorite browser speed test sites to see how it stacks up against the competition, including Firefox and our current default, Chrome. For the most revealing results, we threw Peacekeeper’s HTML5 torture test at each, pitting Waterfox against the site’s Chrome benchmark and our own copy of Chrome.