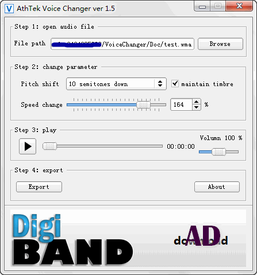 From DigiBandApp:Free Voice Changer allows you to change a voice pitch and speed effortlessly.

Free Voice Changer is an impressed audio tool for Windows user. It can change the voice pitch and speed flexibly with several clicks. After that, your voice will be changed into male or female tendency flexibly. You can also export the audio with sound effects as wave file with one click. The imported audio file could be in *.wav, *.wma and *.mp3 formats. It is not a complex voice changing tool which has elusive panels and functions. It will play exactly as the voice changing software on your desktop. What making it better than other voice changer software is, it can even keep your original timbre after voice changing. As we all know, there are some other voice changers including free ones over the internet. But most of those voice changers will replace your audio drive even it has no problem. If someday you want to uninstall the voice changers, the audio drive will be removed together. That is why Free Voice Changer of AthTek is a more reliable choice for you. It acts just as a concentrated voice changer, alternate the voice pitch and export an audio product. Free Voice Changer provides a direct way to change the voice pitch and speed. The only thing you need to do is to import an existing audio file. It could be a recording of your voice, or a music file with human voice. You can just use Windows Sound Recorder to record your singing in a *.wma file, and import the file to Free Voice Changer. Then you would be able to change the voice pitch and speed as you wish. There is an original function which you can only find in AthTek Free Voice Changer: option of remaining your timbre. Select this option and then your voice timbre will be remained after voice changing. You can play it back to preview the sound effects. If you are satisfied with the sound effects, you can now export the changed voice as a wave file.